The JCC Maccabi Games took Atlanta by storm, uniting almost 1,000 traveling Jewish teens with a hosting delegation of nearly 600, before drawing to a close.

The JCC Maccabi Games took Atlanta by storm, uniting almost 1,000 traveling Jewish athletes from the U.S., Canada, Israel, Mexico and Panama with the hosting delegation of nearly 600, before drawing to a close Aug. 2.

“We were thrilled by the size, scope and, I would say, pageantry of the games,” said Doron Krakow, president of and CEO of the JCC Association of North America. “We gave kids … the chance to see what it’s like to be part of such an extraordinary collection of young people under the framework of the JCC movement, and to see a place here in Atlanta where the Marcus JCC is a flagship of our field.”

Competing in 14 team sports, Atlanta was a force to be reckoned with, collecting three gold, three silver and four bronze medals in addition to dozens of accolades for individual competitors.

While impressive feats of athleticism and displays of sportsmanship were certainly the focus, volunteers were among the most important to keeping the event flowing. Around 1,600 volunteers worked together to rack up 10,000 hours aiding the young athletes and making Atlanta feel like home.

“I’ve been doing this for 20 years and this was a magical, magical week,” said JCC Maccabi Vice President Samantha Cohen. “It was clear that the entire Atlanta community came together to put on this program that was so much more than sports. From the first person who met the delegations off the bus to the last person to say goodbye, it really was incredible.”

Here are a few highlights and top stories from a week filled with Jewish values, community building and fun.

The core of the games is undoubtedly the unity and sportsmanship conjured by uniting so many young Jews to compete. While hundreds of medals were awarded to teams and individuals, perhaps more important were the memories and friendships forged among the athletes. 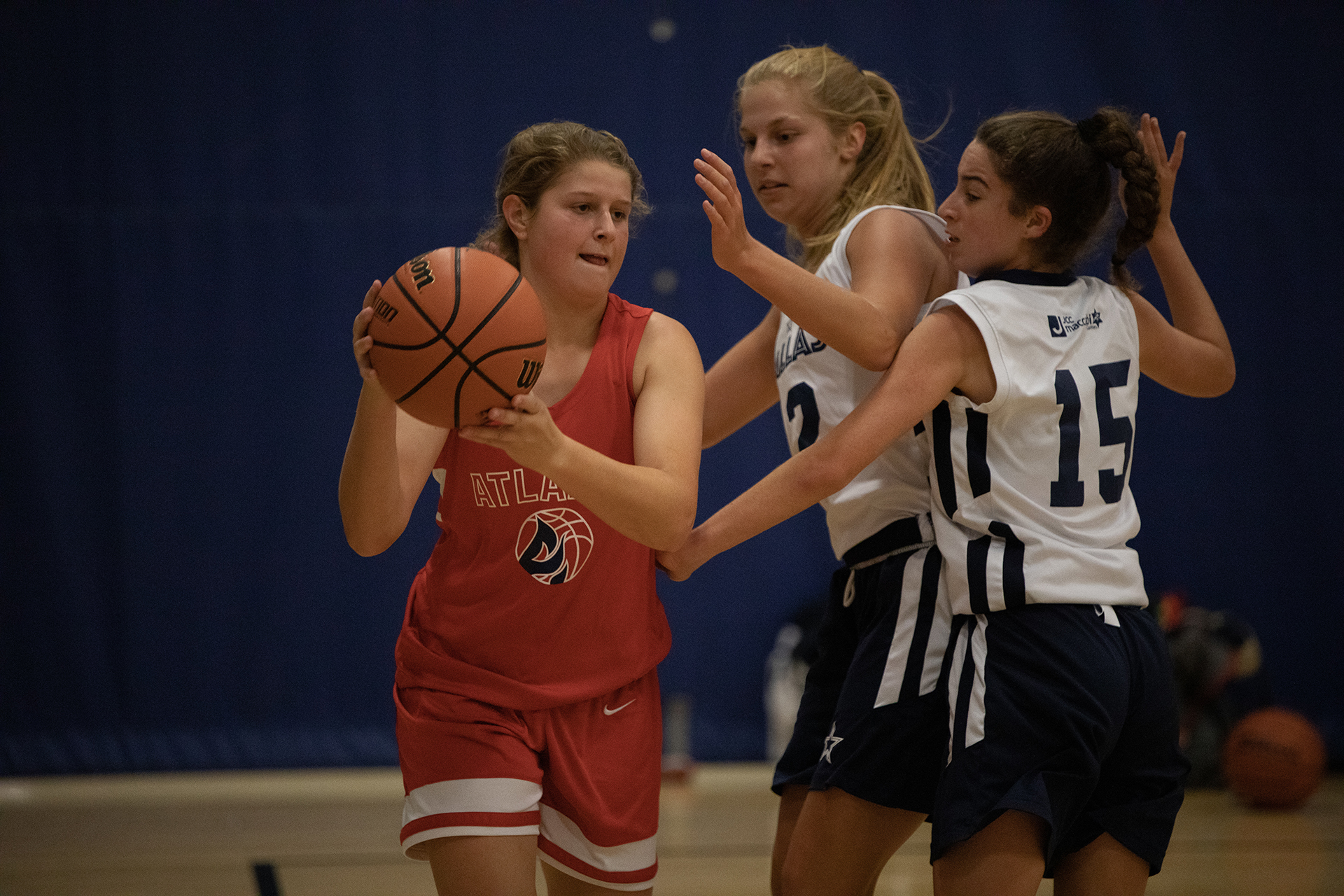 A Team Atlanta player sneaks a pass around two defenders.

“I loved swimming for Team Atlanta,” said athlete Will Solomon. “A highlight of the week was hosting two athletes from Denver at my house.”

Echoing that sentiment was Jessica Siegel, who played volleyball for Team Atlanta. “My family and I enjoyed hosting girls from Team Houston. It was fun meeting people from all over the world.” 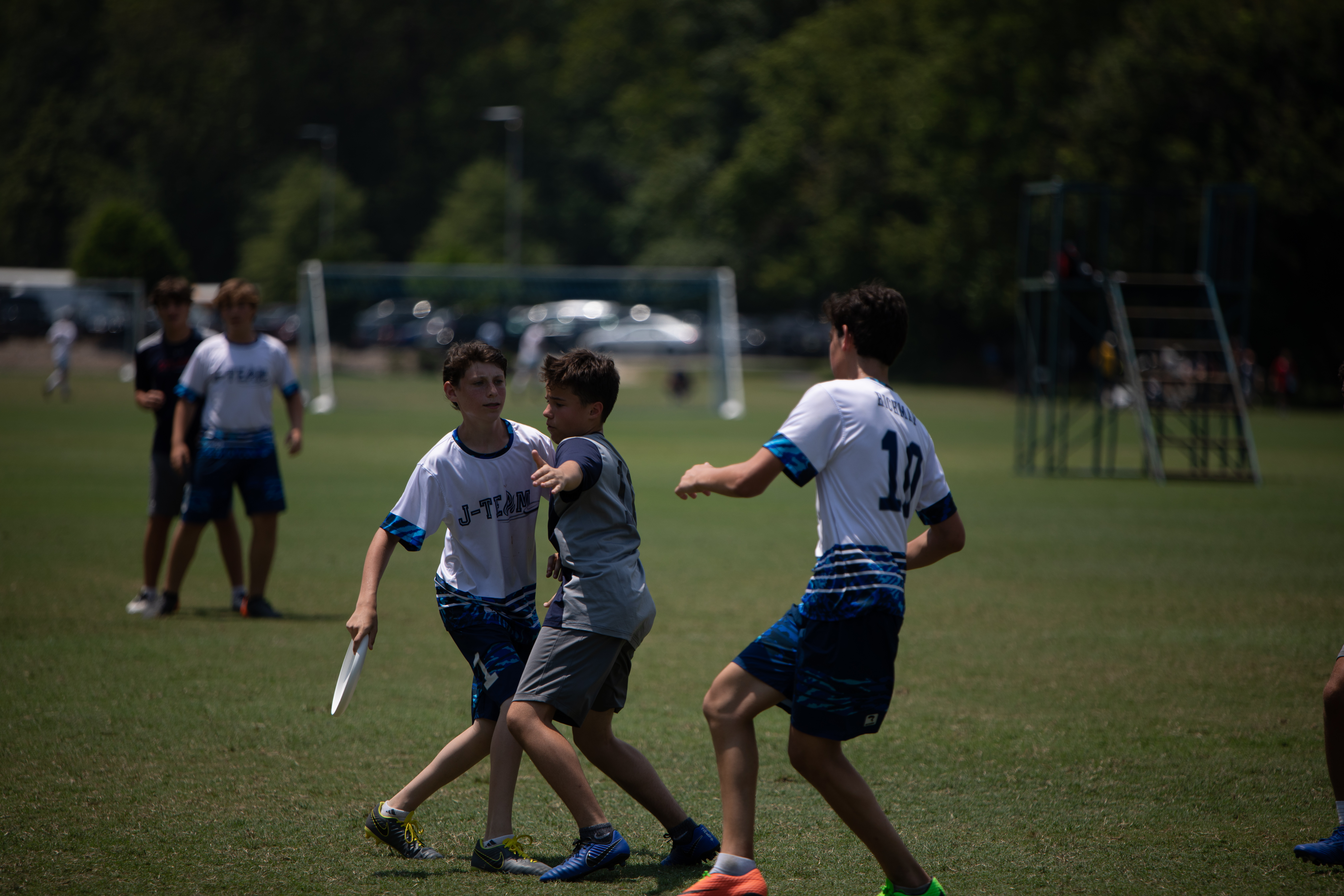 Team Atlanta medaled in the newest sport at the games, ultimate Frisbee.

Gathering so many Jewish teens in one place without providing them the chance to give back to the community and do good for others would be a wasted opportunity, according to Krakow. And that’s where JCC Cares comes in.

“Sports is how we get the children involved, but this is about so much more than just sports,” Cohen said. “It’s really about Jewish values, and one of those values is giving back, tikkun olam.” 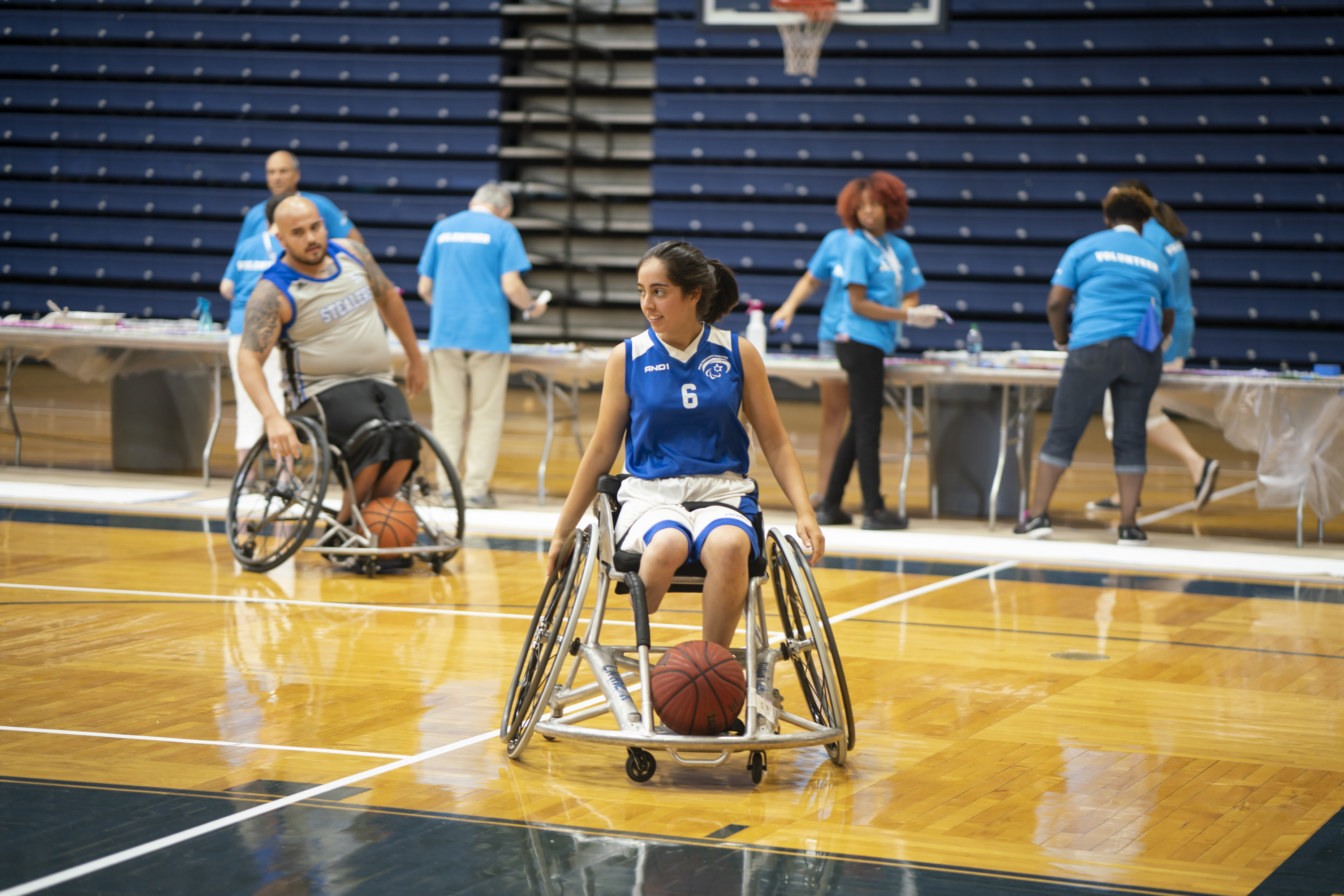 Each year along with the games, the hosting community, in concert with the JCC Association, picks organizations and causes of importance and organizes activities for participants. In Atlanta, the games partnered with Shepherd Center in Atlanta and the Israel Sport Center for the Disabled.

“Atlanta, in particular, was looking at working with athletes with disabilities and the wider idea of inclusion,” Cohen explained. “I was in one of the two sessions and the gym was packed, but you could hear a pin drop. The teens were completely engaged.”

What would a sporting event be without media? And the AJT wasn’t the only journalistic presence at the games. Star Reporter, Maccabi’s own initiative, allowed participants to shape the stories and feature narratives entirely of their own choosing. 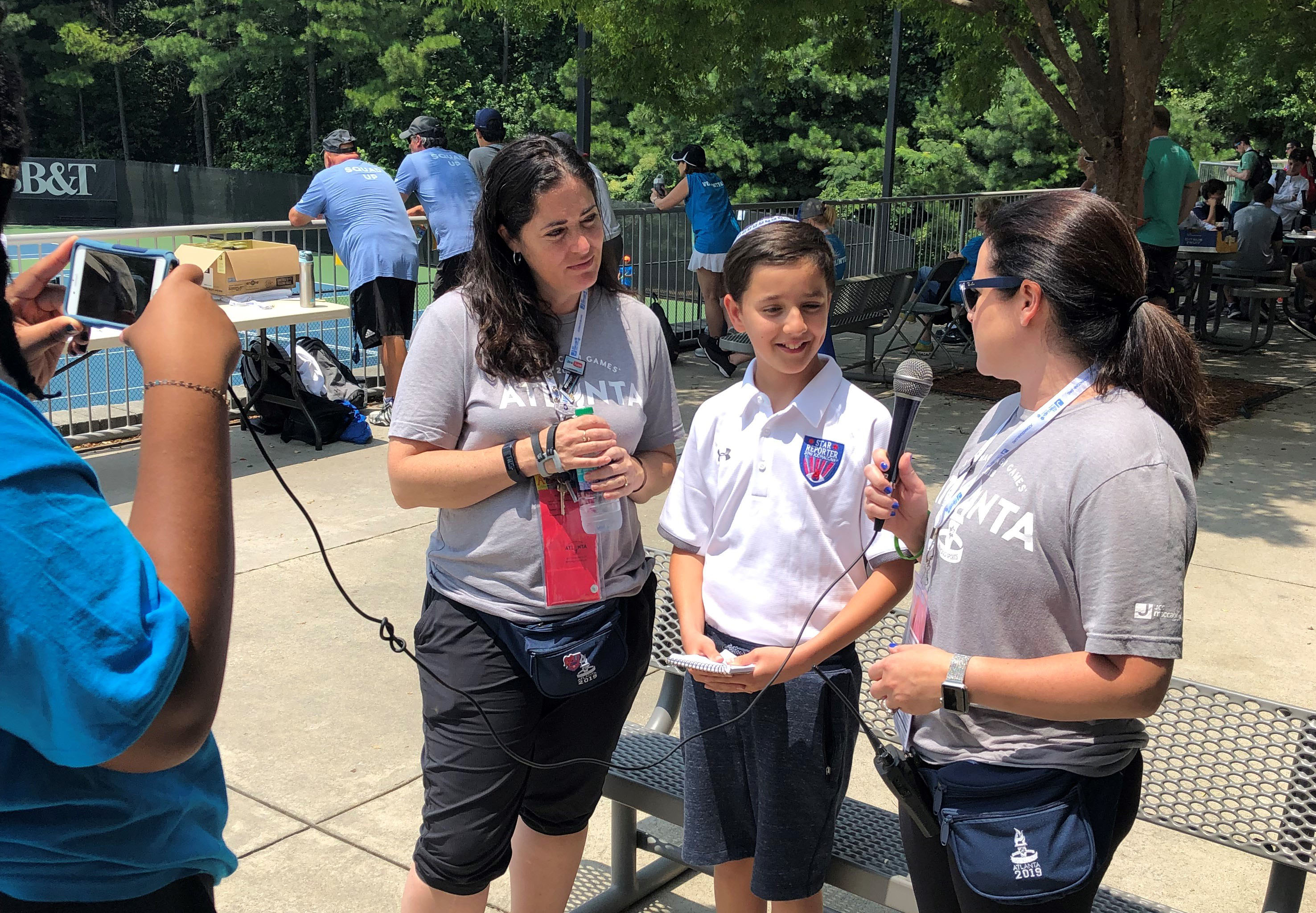 Star Reporter participants interview athletes, coaches, volunteers and more to find the stories at the heart of the Maccabi Games.

“On opening day, we started with interviewing kids as they came in, and we do twice-a-day newsroom meetings and they shape their own stories,” said Michael Kogon, mentor to Star Reporter teens. “Then they spend most of the time as embedded participants like any other team member.”

This year, the Star Reporter soared like never before, partnering with VOX ATL, a program that empowers teens to do their own storytelling through a variety of mediums. Teen members of VOX were on hand to serve as advisors and guiding hands for Star Reporter participants. 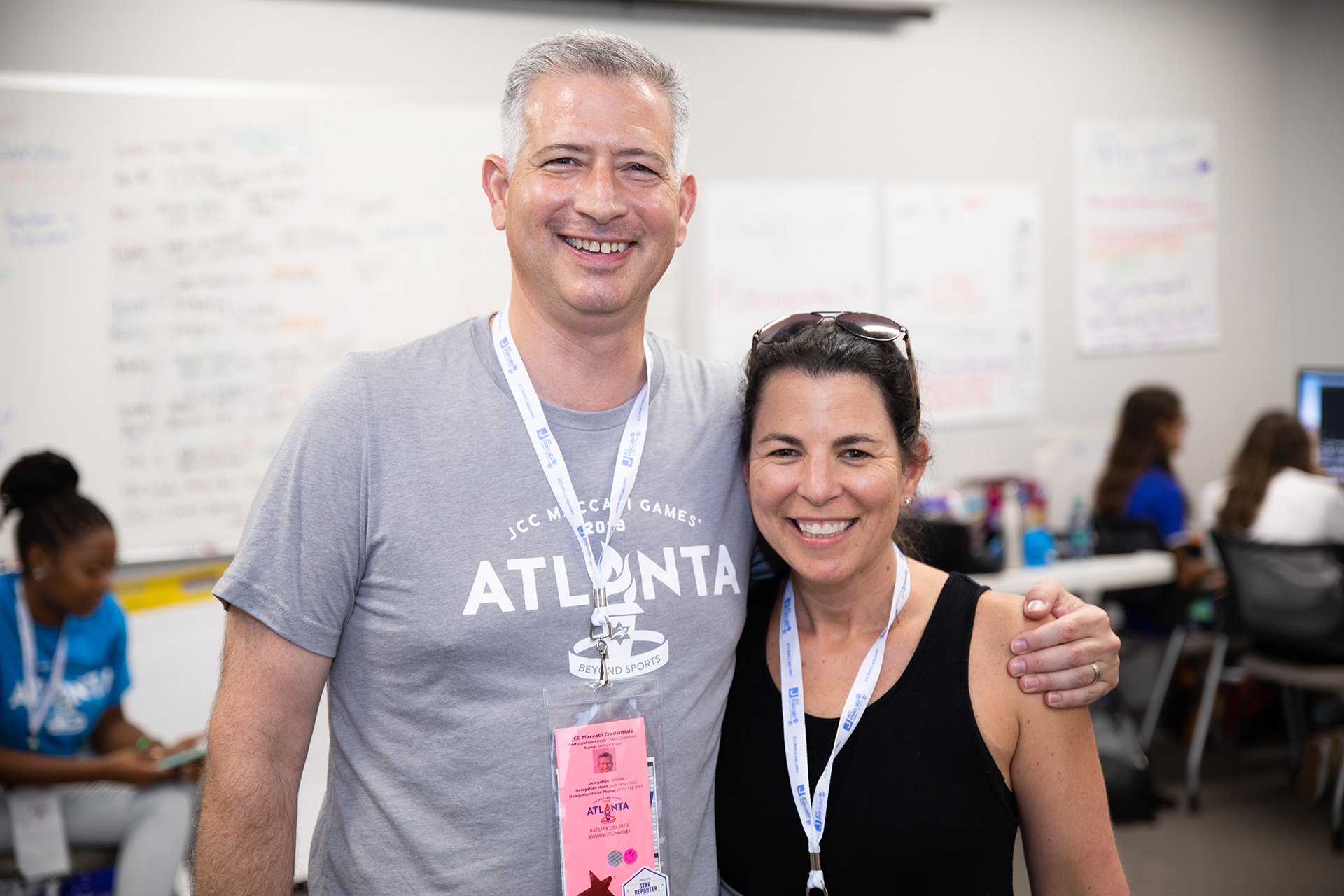 Michael Kogon and Rachel Alterman Wallack served as mentors to teens with the Star Reporter.

“As a youth development organization that has been supporting teens’ media and content creation, we were an appropriate partner to get involved and build out the Star Reporter program,” said Rachel Alterman Wallack, VOX ATL mission director.

From blogs and written content to photography and videography, the Star Reporter provided teens the chance to choose their preferred style to get their voices out there. According to Kogon, it also provided an opportunity to those who otherwise might not be participants in the games.

While television screens and computer monitors might not be the first thing that come to mind when thinking about the Maccabi Games, this year the games featured the very first esports, which are competitive video games 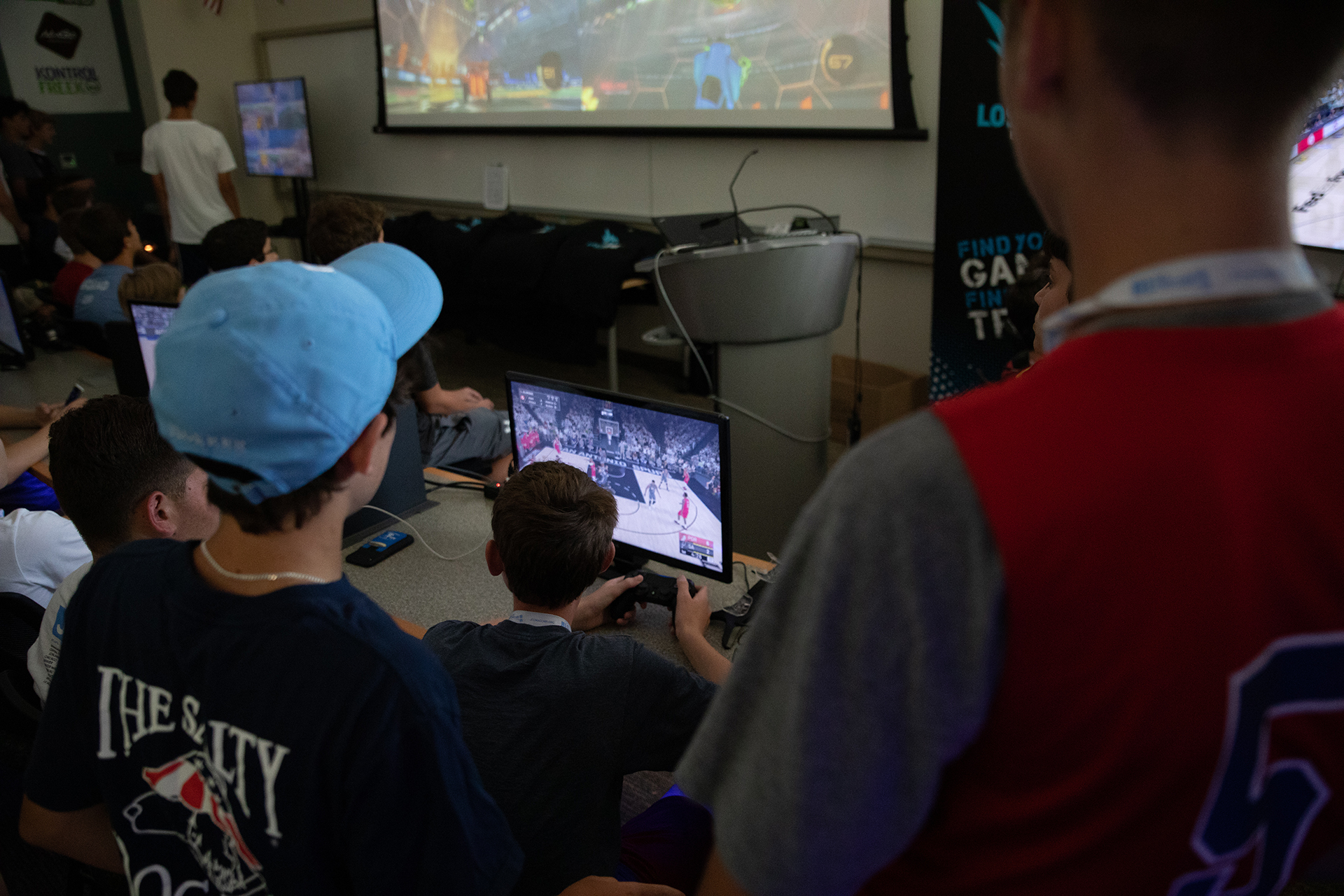 Teens gather in the esports room to compete and hang out during free time.

At the games was Lenny Silberman, a former Maccabi Games director and now president and CEO of Lost Tribe Esports. And the excitement surrounding the new activities was hard to miss, with hundreds of athletes and participants streaming in and out of the room throughout the week.

“Sports is in my DNA. It is my life, my history and my career. This really isn’t about video games. It’s clearly about video games, but for me it’s always been about Jewish engagement,” Silberman said. “If I learned anything during my career, especially working with teenagers, it’s that you need to meet them where they’re at.”

Games were available for free play during athletes’ down time throughout the week and culminated in exhibition tournaments that ended Aug. 1.

Silberman explained that his goal with Lost Tribe Esports is to reach beyond what many other methods would allow.

“It was pretty clear that the phenomena of esports was something big, and not just a fad. It just keeps getting bigger and bigger and bigger,” he said. “Finding Jewish teens in really small towns in Montana, or North Dakota, or Alaska, kids who would never be able to play in Maccabi because there’s no JCC there but who can get involved through gaming, is special.”

Unfortunately, the fun had to eventually draw to a close and 1,000 visiting athletes had flights to catch. But not until the closing ceremonies reunited the masses on Aug. 1 at Mercedes-Benz Stadium. 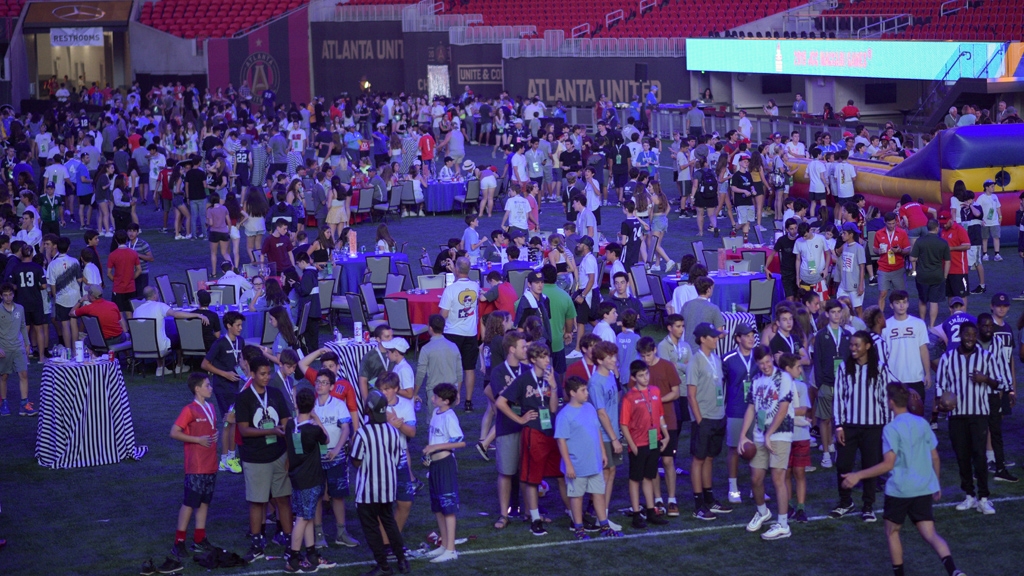 Amy Rubin, Maccabi co-chair at the Marcus JCC, explained that the momentum and energy from the games would continue to invigorate her, as well as the community.

“I think we want to continue to remind people how good it feels to be involved in some way and offer different opportunities and new ways to be connected,” she said. “We’re going to work very hard to find new ways to keep these people involved because we had everyone from families with young children to seniors involved with the games.” 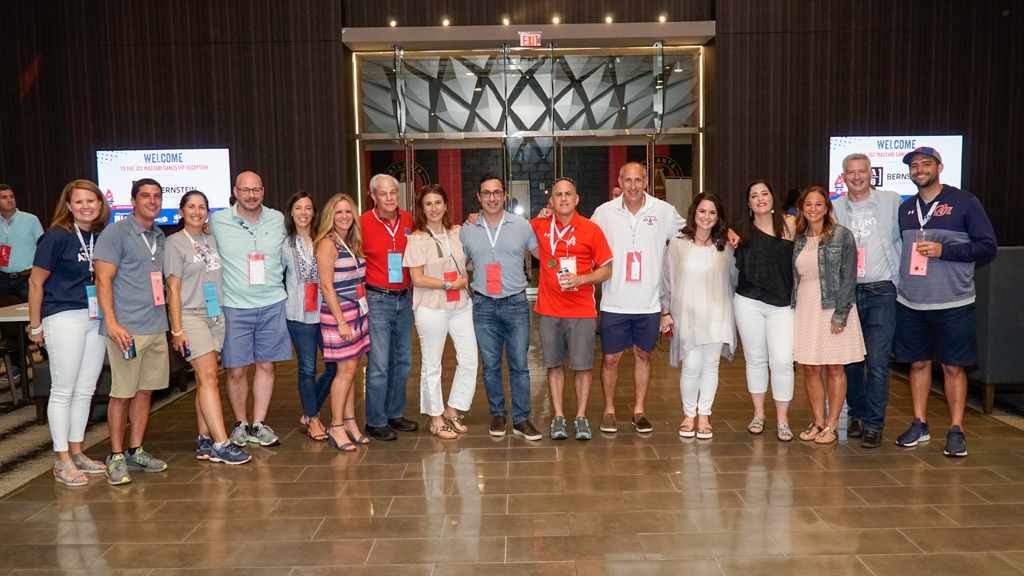 As participants made their way to the airport to get home in time for Shabbat, Krakow noted how many host families were there dropping them off.

“I can’t tell you how many young people were delivered here by their host families and it began very early in the morning,” he said. “It’s weird to think about, but in one week they really have become family.”